This photo walk took us to the Madhya Kailash Temple and the Turkish mosque called Nizamiye Turkish Masjid which were conveniently located right next door to each other. 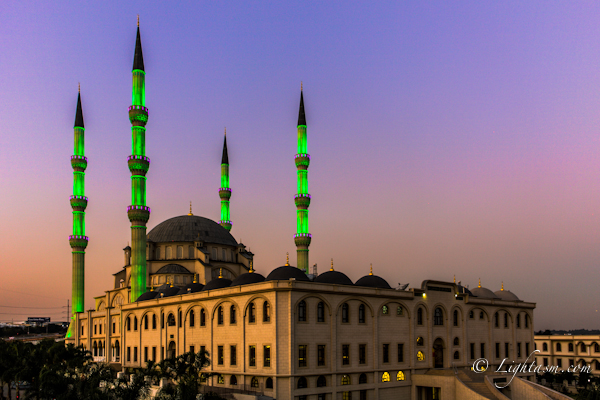 The Nizamiye Turkish Masjid at Twilight

We began the photo walk with a late afternoon tour of the Madhya Kailash Temple. We entered through a decorative archway and long driveway only be greeted with a plain looking brick building. After parking the car and removing our shoes we headed to the front of the temple. There things changed dramatically revealing another even more elaborate design on the face of the temple building.

The building facade had gods and goddesses either side of the entrance with offerings at their feet. In the middle of the courtyard stood a tall glistening golden poll on top of a shrine flanked with smaller buildings around the courtyard. Each building housed statues of various deities and gods. At each housing were offerings of fruit placed in silver dishes at the foot of each deity and incense burnt.

After an hour exploring the Madhya Kailash Temple we headed next door. The Turkish mosque called Nizamiye Turkish Masjid, which we had visited on a previous occasion, still looked the same. The center was busy with worshipers coming and going so we headed to the rooftop of a nearby restaurant in a small shopping center near the mosque. 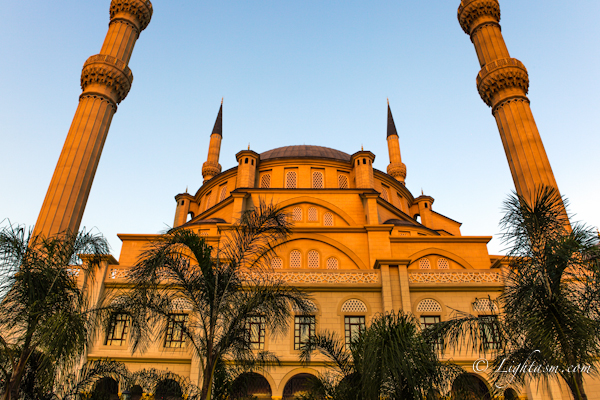 On top of the restaurant we setup a row of tripods to capture the Mosque glowing as the setting sun bathed it in golden light. Finally as darkness began to fall the lights on the towers began their dance. They changed from greens to reds and purples as people came and went and twilight engulfed the area before our eyes. Another photo walk came to an end and we made our way back to our cars. It was a long drive back home but well worth the experience.

Check out the video from the photo walk below. Don’t forget to subscribe to my YouTube channel for more videos.

With such grand buildings I used my full frame Canon 5D MKII with Canon 16-35mm f2.8 to capture the architecture. Because it was also late afternoon and I shot HDR photos I also used my Manfrotto tripod. This also worked well for the long time lapse at the end of the video as day turned to night. If you haven’t seen it yet you can watch it below.