The normally bright and colorful Chinese New Year 2015, or year of the Goat, event had to contend with the weather this time around as rain made for a moody and subdued photowalk. 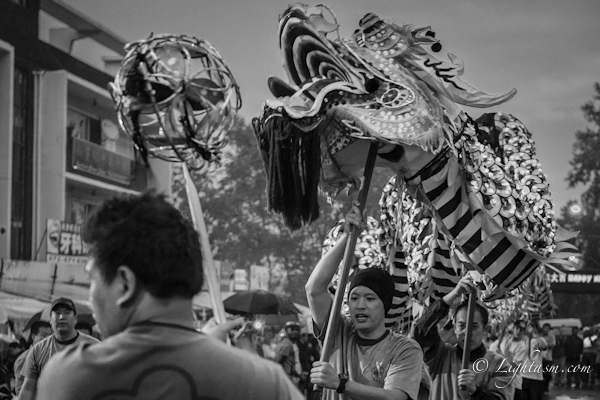 Even with the heavens opening up people made the best of the situation. Some were seeking shelter in nearby shops while children took to the streets running among performers.

As fireworks roared in the distance the festivities continued with shops receiving visits from visitors and lions alike. Traditional lions made their way from shop to shop. With a song and dance they performed, entered the store and exited. Then they set off even more fireworks hanging at the entrance to each shop as a blessing for the new year. 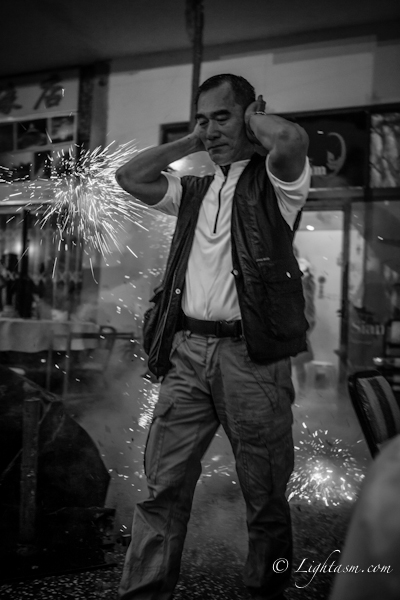 Man walks away from lit fireworks with ears covered

With the rain coming and going people would venture out into the streets every once and awhile. Shop keepers remained calm with tables neatly set waiting for customers. In the end the Chinese New Year 2015 celebrations, while wet and hazy, were a success.

With the rain constantly pouring it was time to get creative. On the spot and not expecting rain I had little at my disposal. It was time to MacGyver my way out of the situation. The best I could manage was a clear plastic bag and an elastic band which worked surprisingly well. By wrapping the camera body and lens in the plastic bag and sealing it with the elastic I had an instant raincoat. This simple hack meant I could leave the protection of the shop archways and get some shots. However it didn’t mean that I would be protected from the elements. By the end of the event I was well and truly soaked to the bone.