It’s that time of year again when Chinese New Year 2016 lights up the night sky with a volley of fireworks heard far and wide. This year I set off to Old China Town in the Johannesburg CBD.

A Chinese lantern is released from a building roof top

With the roads closed off and a police presence there was a feeling of security. The roads and shops was packed to capacity with everyone from the young to the old making the experience a family affair.

Meanwhile dragon and lion dancers made their way between happy visitors. Children enjoyed themselves riding parents shoulders and the smell of food was everywhere. 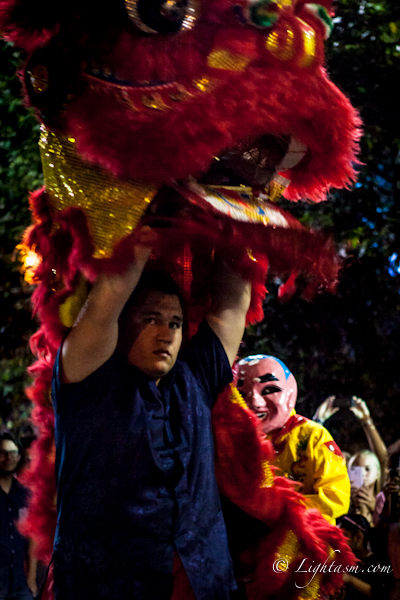 The weather behaved this year allowing for an incredible fireworks display. I made my way to a nearby apartment block and to the roof. From there I could see the full theatrics of the fireworks show along with residents who had made their way up top.

Fireworks exploding in the night sky

The night ended on a rooftop with Chinese lanterns being released into the night sky floating away on warm winds.

It was down to my trusty Canon 5D MKII and 24-70mm as I wondered the streets snapping photos. By the time I arrived it was already night so it was a case of opening the aperture wide and pumping up the ISO. With so much movement I try keep my shutter speed above the focal length. This is a common trick to avoid camera shake especially if there’s a lot of movement. Because of the variation in range I try stick with 1/60th of a second to 1/80th of a second. To be safe I normally stick to 1/80th but slow down if I can find a quiet spot.