ISO – Part 3 of the Photography for Beginners Tutorial

The ISO is the last of the fundamental light controls you’ll need to know before you can claim to be a real photographer. It is also the last control to have an impact on light before your photo becomes a reality.

The ISO is simply the sensitivity of the camera’s sensor. What do I mean about sensitivity? Does it like romantic comedy’s on rainy days? No, I mean how sensitive it is to light.

With most of today’s camera’s you’ll find settings on the low end of 50 or 100. On the high end, or the more sensitive the sensor is to light, the better for low light photography. This will vary from camera to camera and also between manufacturers. Most of today’s cameras can have settings of up to 6,400 or 25,600. There are even some cameras that can go as high as 4,000,000 like from Canon!

The History of ISO in Photography

Back when photographers still used film rolls in their camera’s they had to make a decision. That decision was based on the environment they were in and the light available. If there wasn’t enough light or they were shooting in poorly lit conditions a photographer would choose a film roll with a high light sensitivity. Consequently this meant they were stuck shooting with that roll until the film was done.

Over time this has become less of an issue. In the early days of digital photography high settings were renowned for creating horrible noise. As a result the higher the sensitivity the worse the noise got and the worse the picture looked.

Because of the technological improvements this is no longer an issue making high ISO settings common place while still creating high quality images.

What is Camera Noise?

Noise creates a speckled look on photos. This can be seen mostly in darker areas where there is less light. If you take a look at the shadows in an image to get an idea of camera noise. What should be a smooth transition is instead full of random spots of colour.

Most photography software these days has a feature to clean this up. Just be warned, removing noise from a photo normally also results in softer images due to the cleaning process. 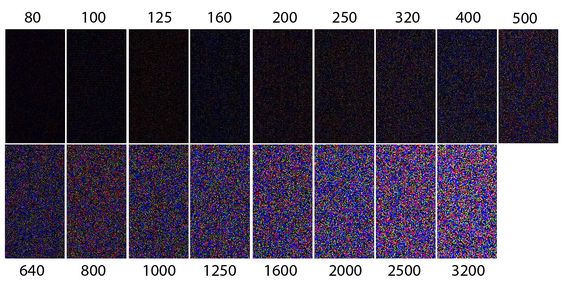 In conclusion ISO has become less of an issue in terms of downsides. You will need to decide for yourself how much noise is acceptable to you. Each photographer has their own preferences when it comes to image quality. Just remember the below info…